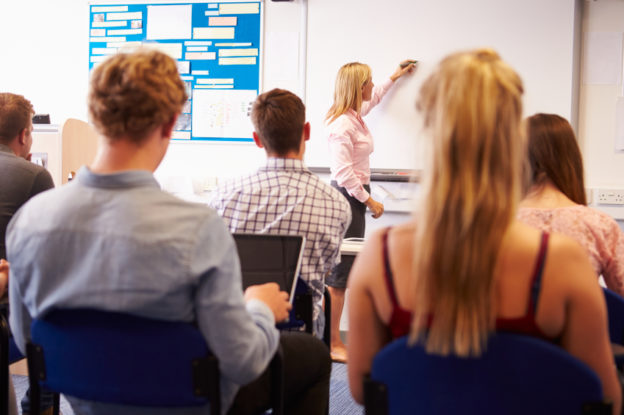 The lecture has been a staple of pedagogy since the first formal higher-learning universities were established in Western Europe in the 11th century. Recent studies show that it is still very widely used, but sometimes due more to cost-effectiveness and familiarity than to a belief that it remains a highly effective method of instruction.

Even though it remains very widely used, the traditional lecture has taken a serious hit to its reputation in recent years, mostly spearheaded by the “active learning” movement that really began to gather steam in the mid-90s. Though the evidence in favor of active learning is far from conclusive, methods of this nature seem to enjoy much more popularity among instructors, even if these instructors are not always able to put them into practice.

Is the lecture getting an undeserved bad rap, however? Is the belief that lectures are ineffective simply rooted in the fact that so many of them are being delivered improperly? And in the most cynical possible view, is active learning preferred by instructors because it gives them a chance to take long breaks in the middle of class?

These questions have individual answers that are not easily tracked by survey or scientific study. What we can look at, however, is evidence of the traditional lecture still proving effective in modern settings. And a number of recent studies show that lectures still have their useful place among the best practices of higher education, if perhaps being more situational than previously believed.

Lecturing May Skew Toward The Early Years

There are several direct studies that indicate learners with less experience prefer a non-interactive lecture, while those who are more familiar with the subject matter are more likely to want to spend class time in group activities.

For example, a 2012 literature review published in American Educator came down decisively on the side of the traditional lecture for novice students. The evidence examined shows that explicit instruction and continual guidance is best for students who are unfamiliar with the material, though this does not entirely preclude the use of activities and group discussions in these settings.

Meanwhile, a 2013 study published in the Annual Review of Psychology provides supporting evidence at the opposite end of the spectrum. Graduate students that were studied showed a decided preference for group work as opposed to non-interactive lecture. A likely explanation for this trend is that students are more likely to be unprepared and lost when they are in the early stages of their field of study, leading them to conclude that group or self-directed work is a waste of their time.

Undergraduate students would appear to derive more benefit from the traditional passive lecture, particularly if they are coming out of the K-12 environment. Lecture is still commonly used there as studies continue to tie it to major improvements in grades.

The Skill And Technique Of The Lecturer

Small changes in the way in which a passive lecture is delivered can add up to large differences in student engagement and retention. While lecturing doesn’t come naturally to all instructors, there are evidence-based tweaks that anyone can make to see improvements in their classroom results.

The Australian Society for Evidence Based Teaching recommends that lecturers employ a “show and tell” structure at the outset of each lecture, a pause for questioning to verify understanding at the end of each major segment of the lecture, and the use of graphical summary outlines that are unique to the lecture.

Studies have also found that student engagement with a lecture pretty consistently tends to wane after 10 to 15 minutes. This doesn’t mean that long lectures are out the window, however; it just means that they need to be broken up appropriately with questioning periods, breaks and brief periods of interaction between students.

The Case For The Lecture

While we’ve learned that the lecture is certainly not the one-size-fits-all educational tool it was once thought to be, the backlash it’s faced in the last two decades may also be a case of overcorrection. Lectures still have a place in higher-education classrooms when deployed strategically and skillfully. Interested in learning more about how productivity can be improved in an educational setting? Contact us!